T-matching of adjectives in Danish

In this blog post, you will learn how to use Danish adjectives in front of a countable noun in the singular indefinite form (like ‘a big apple’).

When t-matching is not possible?

Adding ‘-t’ to the adjective is a technical matching and should be remembered as a rule. The -t matching of adjectives happens when the noun is in the singular form. Often, this t-matching is called the t-form of the adjective.

As mentioned above, t-matching happens in most cases, but not always, because not all the adjectives are technically able to make the t-matching due to their initial form and phonetic regularities in the language.

See the example for the adjective flot (=excellent/gorgeous):

The adjective flot will behave similarly with et resultat and en præstation, even though the two nouns belong to different grammatical genders. The adjective flot already ends in -t in its initial form, so no t-matching is possible. Due to Danish phonetic rules, the word cannot end in a double consonant letter having no vowel afterwards. So to say et flott resultat*, would be logically correct according to the rule but is wrong in language usage. However, the case is different with ‘fuld’, as it ends in two different consonants, so t-adding is possible.

Other cases when t-matching is not possible, is when the initial dictionary form of the adjective ends in -e:

How to predict the behaviour of the adjective?

It is not possible to remember all the adjectives and all their peculiarities. A reliable tip is to learn the noun with its gender, so you will automatically choose the adjective form with a singular indefinite noun. Learn the noun gender group - ‘et’ or ‘en’, and it will pay you off in the correct usage of adjectives. Another way is to check out in the dictionary - especially adjectives, which may not have -t matching. 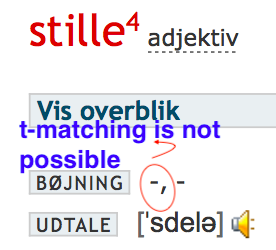 Do you have questions, comments or suggestions - email to elena@sokolova.dk.